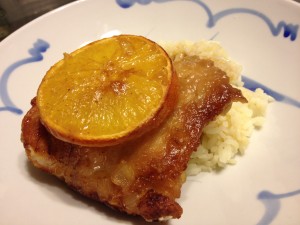 Made this because I had some oranges that needed to be used and some chicken already thawed: I didn't have almonds or raisins so I skipped them: didn't miss the nuts; the raisins would have been fun. I changed the recipe from the way in which it was originally written: the chicken is supposed to be transferred to a new baking pan and the sauce poured over, but why use a new pan if you're browning in a Dutch oven? Also you're supposed to use the orange slices to garnish when it's finished cooking, but I thought putting them on before looked prettier and less contrived.

I made this a few times to bring to high school Spanish class for events. It's pretty darned good, if only ostensibly Spanish. Recipe originally from a Girl Scout book.