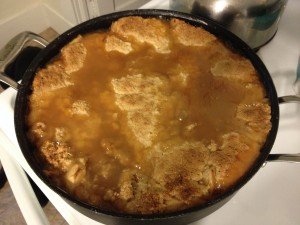 October 11, 2015
Made this for Kate Fahey's birthday celebration at Maura's: an apple crisp with no white sugar and no nuts was requested. A traditional crisp topping is crunchy because it's made with dry sugar, so my attempt with honey (maple syrup sweetened the filling) was definitely wetter than typical: sort of a cross between a crisp and a cobbler. I used the filling from my Skillet Apple Pie, and a topping "cobblered" together from several online recipes. It was well received, even though the candles melted when we put them in it because it was still really hot.  🙂