Bill Denneen made bacon like this when I visited his family in December of 2014, and I was highly skeptical, but subsequently impressed. It really comes out crisp, and all of the oil stays in the paper towels, so the bacon isn’t as greasy, and the cleanup is incredibly easy. Your house will still smell like bacon, but there won’t be splatters everywhere, nor will you burn yourself with popping oil.

I confirmed the details before doing it myself, here.

Line the bottom of a baking dish (or a plate, although you risk dripping without pan edges) with four layers of paper towel.

If this is all you need to cook, cover with two layers of paper towel, and microwave for about 1 minute per slice. 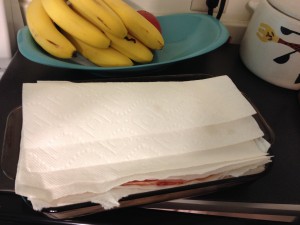 Microwave the pan approximately 1 minute per strip of bacon. If an average package of bacon has, say, 12 slices, I’ll start with 8 minutes, then check it.  Then I will do the rest of the cooking one minute at a time, checking after each increment to avoid burning.

Take the bacon off the paper right away, or it tends to stick. Of course, the oily paper is hot, so be careful when you are taking it out of the pan. 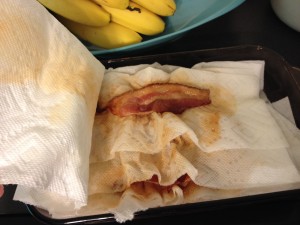 This is a great way to make bacon for sandwiches or subsequent baking, but of course it’s also just great for breakfast.  🙂 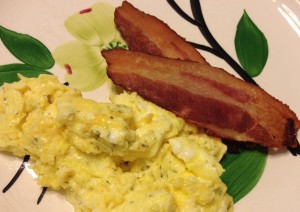