Must be jelly, ’cause jam don’t shake like that!

Fill your pot about half full of water. Heat the water until hot, not boiling.

Wash your jars and lids. 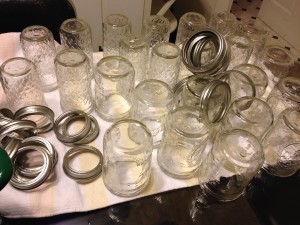 Keep the jars and seals hot until ready to be filled. For keeping jars hot, you can wash them in the dishwasher and leave them there until ready to use. I don’t have a dishwasher, so I just threw them in the boiling water in the canning pot until I needed to fill them. 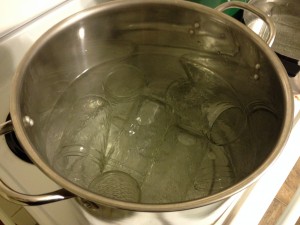 You can keep the seals warm by placing them in a small pan of water. Bring to just below a boil and remove from heat. Leave the seals in the water until ready for a jar. If you put the lids in in alternating directions, they won’t stick together when you try to get them out of the water. 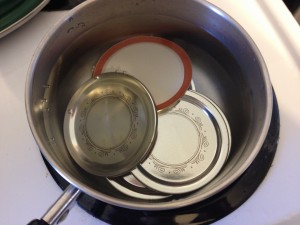 Prepare and pack food according to the instructions in your recipe. 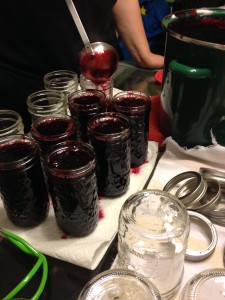 Wipe the rims of the jars clean with a damp paper towel.

Fish the seals out of the hot water and place on the jars. I don’t have a magnet tool to grab them, but chopstick are better than fishing in boiling water with my bare hands. 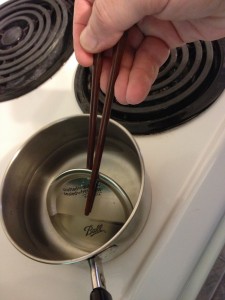 Place the rings on the jars and hand tighten. 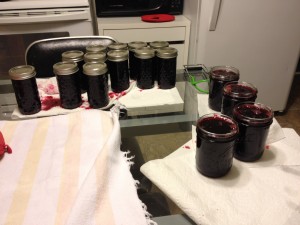 You want to keep your jars off the bottom of the canning pot and keep them from touching each other. I don’t have a canning pot, so I just put a dish towel in the bottom. It floated a little but worked okay.

Lower the jars carefully into the pot. 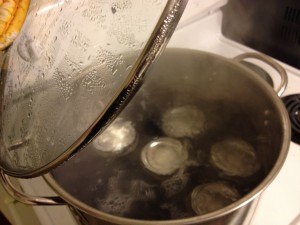 Water needs to flow freely around each jar. Add hot water if needed until the jars are covered by at least 2 inches of boiling water.

Cover and return to a full boil. NOW start your timing. 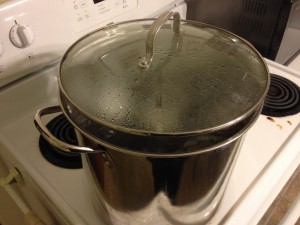 Check occasionally to be sure that the pot is at a full boil.

Process according to recipe directions.

When your time is up, remove the jars carefully using the jar lifter. Put them on a thick towel to cool. 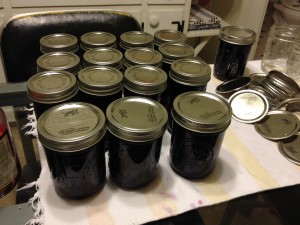 If you find a jar that did not seal, throw it back in the boiling water and try again. If it still doesn’t seal, just put it in the fridge and use the food within a few days.

Label the jars with the food type and date (or at least the year).

Store your jars in a cool, dark, dry place.